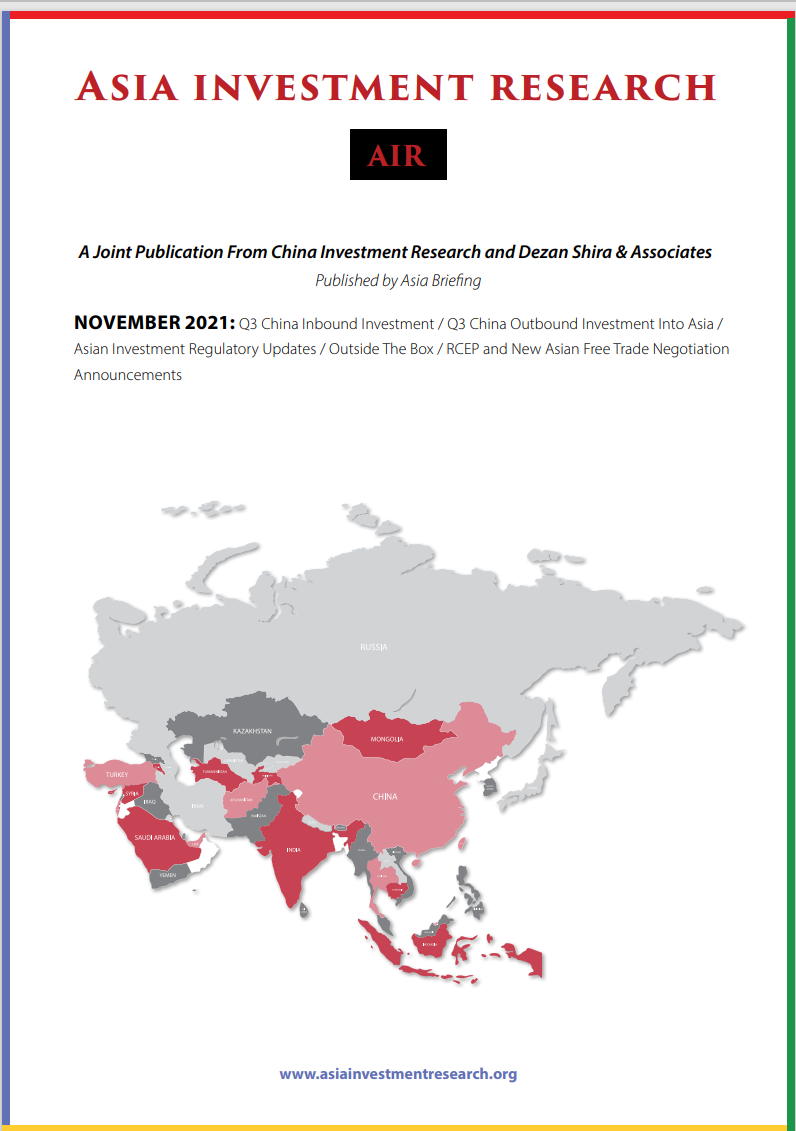 Tracking where the money is heading is an excellent way to find new investment trends and where the best and fastest returns are likely to be found. In our latest report, Asia Investment Research looks at where capital is flowing from the United States, EU, and UK into China and Asia - the volumes, companies, and the projects involved.

The Asian region topped all other global areas except for China with US$7.4 billion of disclosed investment amounts. Singapore led these with over US$3 billion while Hong Kong saw over US$2 billion. Activity was concentrated in China inbound real estate and logistics, both in purchases as well as in funds designed to acquire these assets. Singapore’s GLP remained very active in both. There were also various small consumer tech investments.

Announced Q3 inbound saw increased volumes and investments from all four global geographic regions, totaling over US$20 billion with disclosed values. This represents a record amount since we began tracking this activity in 2018. We have not seen this breadth and depth before across such a diverse group of industries. These have been led by NEVs, tech, healthcare/pharma and renewables.

There was China outbound investments into several ASEAN markets, led by Singapore and followed by Indonesia, Malaysia, Thailand and Philippines. Collectively, these markets saw circa 30 investments, or circa 15% of total Chinese outbound volume. Singapore was clearly the leading destination, attracting nearly 20 investments, across numerous industries, including real estate (three sizeable acquisitions including Q3’s largest acquisition), TMT, renewables, healthcare, financial (including crypto),industrials and consumer/ecommerce. Indonesia saw four investments, focused on TMT, fintech and minerals (lithium). Malaysia also saw four investments across industrial, NEV, social media and fintech. There were investments into insurtech in Thailand and bitcoin into the Philippines.

The Asian Regional Comprehensive Economic Partnership has now been ratified and is effective from 1st January 2022. This includes all ten ASEAN nations, China, Japan, South Korea, together with Australia and New Zealand. It is now the world’s largest free trade area responsible for 30% of global trade. This will undoubtedly increase. Our research shows investment flows are already going into these markets in anticipation of its imminent arrival. We discuss origins, types, amounts and industries.

Elsewhere, Free Trade discussions with eyes to agreements are being held between a variety of Asian countries including the RCEP nations but also specfically involving Cambodia, India, Indonesia, Iran, Mongolia, and further developments with both the Eurasian Economic Union in Africa, and the Belt & Road Initiative in South America. These developments will ultimately affect bilateral, intra-Asian and global trade corridors and create new investment and export opportunities. Other affected countries this quarter include Armenia, Belarus, Bosnia, Ecuador, Egypt, Israel, Kazakhstan, Kyrgyzstan, Oman, Russia, The Southern African Customs Union and the UK.

In this unique trade mapping exercise we show you who is talking free trade with who.